Back to blog
Using TDS to Deploy to Sitecore Azure

Deploying to a Sitecore environment safely and seamlessly can be challenging. The main reason for this is the amount of time it takes to deploy item updates. While code changes are pushed very rapidly, pushing updates to the content delivery servers is usually done via a publish operation. Depending on the number of changes, this publishing may take a long time. While this is going on, your site may experience problems due to inconsistencies between items that have been deployed and items that are waiting to be deployed. In addition, the items needed by the newly deployed code may not be available yet.

There are a number of strategies that have been developed to prevent this from being a problem in large production sites. These work well, but are beyond the scope of this post. I would like to cover a deployment process that uses the Sitecore Azure platform and TDS to seamlessly deploy a site.

Sitecore Azure allows the Content Management and Content Delivery servers to be hosted in the cloud. This allows the deployment of a robust Sitecore infrastructure with a minimal amount of physical hardware. You will still need to host a Deployment Server (DS) locally, but this hardware is usually a low-cost off the shelf server or even a VM.

Once the servers have been setup in Azure, the farm should resemble the diagram below. 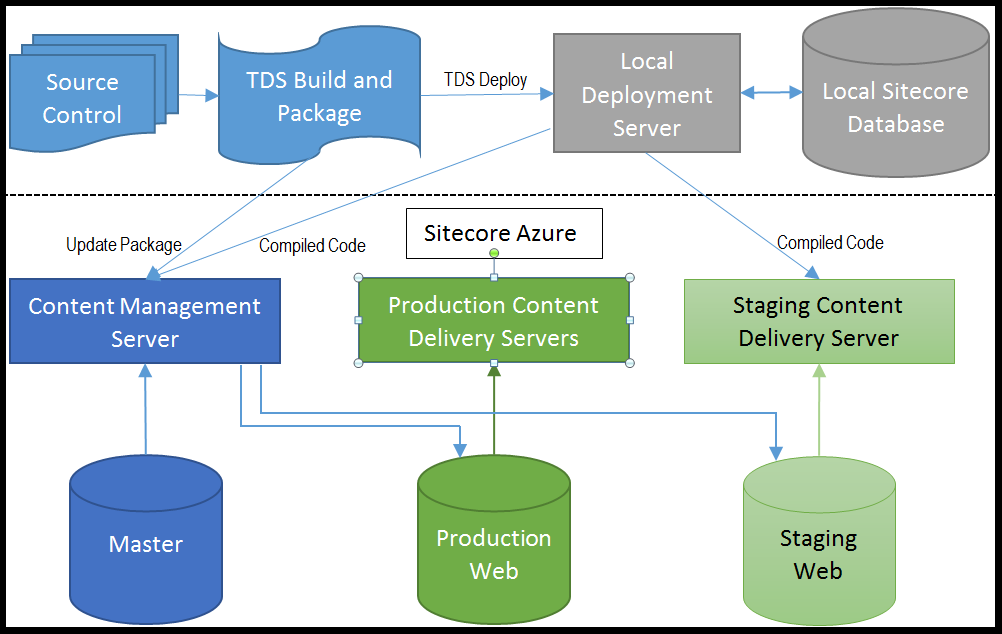 
TDS is used to build the solution and deploy it to the Local Deployment server. As part of the same build, TDS is also instructed to build an update package. Normally, TDS builds to either a Sitecore instance or a package for later deployment. Due to the nature of Sitecore’s Azure implementation, having an automatic deployment and package in a single build is very useful. This allows the site to be deployed and tested locally before beginning the Azure deployment. In addition to enabling package generation, the option “Generate separate code and item packages” should be chosen for this build as well. 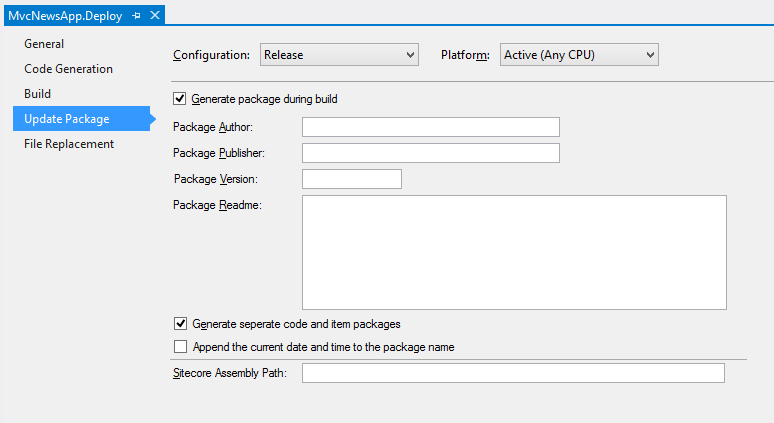 At this point, all code and items are deployed to the Content Management environment and the users can test the site and complete any content changes before going live. Users should be warned that they cannot publish changes to the current live site at this time because they may be incompatible with the version of the site running on the production Content Delivery farm. Updating permissions on the publishing targets to hide the current production instance in Sitecore can be used to prevent users from accidentally publishing at this time.


The names Sitecore Azure gives the publishing target databases are not very user friendly. The Display Name of the publishing target item can be set in the Content Editor on the Content Management instance to a name like “Production” that is much more meaningful to your users. The publish dialogs will show the friendly display name instead of the internal names. This has the added advantage that when a new version of the site is deployed, the proper Content Delivery web database can be given a name the content editors will be familiar with. This prevents content editors from publishing to the wrong location.


In the process I have outlined, there are many manual steps. Since most of the interactions with Azure are done through the Sitecore Azure Desktop application, there is ample opportunity for automation. Scripting these steps can be accomplished by adding web services to the Local Deploy instance to programmatically execute these steps. This is beyond the scope of this post. When adding additional automation to the process, some consideration should be taken to preserve the built in opportunities for testing the new deployment. Even though there seems to be a lot of testing, this careful attention to detail helps ensure a successful deployment.