Back to blog
Azure Sitecore Deployment: Preparing the Default Scripts and Packages

This is the second in my series of blog posts on Sitecore deployments on Azure. The other posts in this series can be found here:-

Part 1: Setting Up the Solution and VSO Build

Installing Sitecore in an Azure environment can be complex due to the large number of options available to the user. I chose to use the XP environment (the most complex) with the lowest settings. This was done purely for research purposes, other environment configurations should work well with minor modifications to the scripts included here. This post goes over preparing a default setup for a Sitecore Azure deployment. Later (in the next post) we will be extending this to add a custom module to the install.

The Sitecore Azure packages and Azure templates need to be stored in an online blob container so the deployment scripts can access them. The arrangement of the azure templates is dependent on relative paths, so it is important to follow the exact procedures in this post.

The first set of files to upload to blob storage are the Sitecore deployment files. These should be located in a single folder. I called my storage container sitecore82u3: 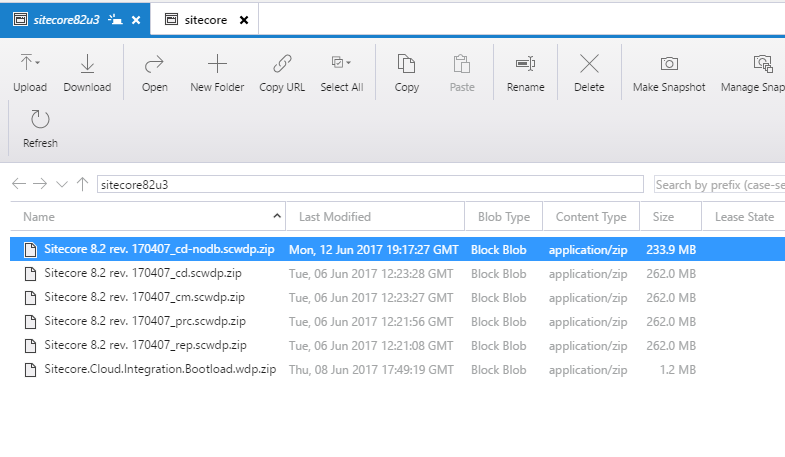 These files contain the full Sitecore installations, and should be stored in a non-public blob. This means you will have to use the Azure Storage Explorer to create a shared access signature for each file. The full URL's for each file with the shared access signature should be added to the appropriate location in your azuredeploy.parameters.json file. An example file is included in our GitHub.

Note: The _nodb and _Bootload packages seen in the image will be discussed later in this blog post series. They will not yet be needed for the default setup described in this post.

As it turns out, there is an additional parameter in the deployment package, which is not referenced in the parameters. Bas Lijten pointed out to me that to fix this, you can either manually add that parameter to the ARM template, or rebuild the Web Deploy Package, removing the parameter. We opted to add it to the ARM template, passing in a hard-coded value. The following was added to the nested/application.json template file, for the CM deployment (the parameter is only required on CM for the xp setup) "Social Link Domain": "http://mywebsite.com/" The updated version of this file can be found on our Github repo. Within there we currently hard code the domain used by the Social Connect module....but you can modify it to read from parameters if you like, passing in a correct value. For now, the hard coded value gets us past the deployment issue, so grab the file and rename it to application.json, overwriting the default one that comes from Sitecore's repo. (it's a copy of the files from Sitecore's repo with the change above added, is up to date as of the 13th of July, 2017).

One of the problems we ran into building our deployments for Sitecore 8.2 update 3 (using v1.1 of the Sitecore Azure Toolkit) was that the scripts and templates needed to be referenced via a URL instead of the local file system. The 8.2 update 1 scripts (with v1.0 of the Sitecore Azure Toolkit) worked fine if they were on the local file system, but the newer method did not. This initially caused us problems because certain scripts needed to be stored in specific folders relative to other scripts and the shared access token got in the way of constructing the urls.

Our solution to this was to create a public blob storage container called sitecore and store all of the scripts in there. Since it was public, no shared access token was needed and everything worked correctly.

This was the option we went with....being the easiest to setup. You can see an alternative to this method further down the page. 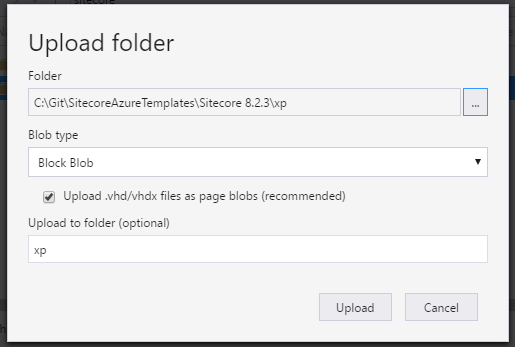 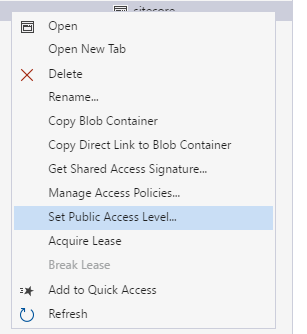 Deployment Scripts: Option 2 - Give a single SAS to the entire templates container

An alternative way of granting access to the ARM templates is to grant a Shared Access Signature on the container (instead of giving it public access), and then set the $templatelinkAccessToken parameter. You can do this by passing in the $templatelinkAccessToken value though the -SetKeyValue argument in your deployment. A full explanation can be found here. Now you have the ARM templates in a storage container, and the packages also in a container, this should be everything you need to install the default XP instance in Sitecore Azure.

Allow PowerShell to have the correct Execution Policy to run scripts. Set-ExecutionPolicy Unrestricted

Note that once you have the Azure and AzureRm PowerShell modules installed into your system, they are on the local machine....so future attempts won't require you to reinstall it.

Unblock, and Unzip the Azure Toolkit v1.1 to your system, noting the path, which can be pasted into the Install.ps1 script mentioned below.

An install script called Install.ps1.example has been included in our GitHub. This will need to be renamed to Install.ps1 and modified slightly to contain paths to your Sitecore license file, Sitecore Azure Toolkit and the ArmTemplateUrl described above. If you went with Option 2 for getting the URLs for the ARM templates, you may also need to modify the script to pass in the appropriate parameters as well. Once the file has been modified, update your local azure.deploy.parameters.json file with your blob storage URLs (to the CM, CD, PRC and REP packages), and Mongo connection strings (you can setup some free ones using MLab. You also need to update the other parameters with usernames/passwords as you wish.

Save the file, and run the Install.ps1 script from PowerShell. It will prompt you for credentials and create your default environment. After about 20-30 minutes, you will have a working, default Sitecore instance.

Next we will look into adding custom modules to our install process! Catching up? Check out Part 1 of our series, or read the complete project on Github.