Back to blog
FxCop Rules for Sitecore Helix

In early 2015, Sitecore released the Habitat project. This project is an example of an implementation using the Helix framework. One of the major complaints about Habitat was the large number of projects. Managing and compiling the Habitat solution can, in some cases, be somewhat difficult. I feel one of the reasons behind the large number of projects is to help enforce the Module inheritance rules specified in Helix. By separating each module into its own project, cross module dependencies become more obvious. If a better way can be found to track down violations of the Helix design principals, some of the components in a typical Helix implementation can be combined, resulting in fewer projects and faster build times.

The Helix documentation provides a very good explanation of the rules, and reasons for the rules, governing Helix implementations. I’m not going to reproduce that here. My quick summary of Helix rules for module dependencies is as follows:

Even if modules are separated into their own projects, it is still relatively easy for rogue developers to add a reference to another module that breaks the above rules. Catching this relies on having a process that makes note of new references and makes sure they don’t break the rules. This can be error prone. Having the Helix rules checked every time the project is compiled would be ideal. Fortunately, this is exactly what FxCop was designed to do. By adding 5 simple rules, FxCop can make sure the Helix design principals are adhered to. By following the naming convention for Helix namespaces, FxCop rules can be constructed to make sure modules aren’t referencing components in violation of the Helix rules listed above. Here are the rules: The astute reader will notice ScHlx003 is missing from the list. This rule checks to make sure Foundations do not access other Foundations. This isn’t forbidden by the Helix documentation, but was quite easy to implement, so it was included in case developers want to track their cross Foundation references. 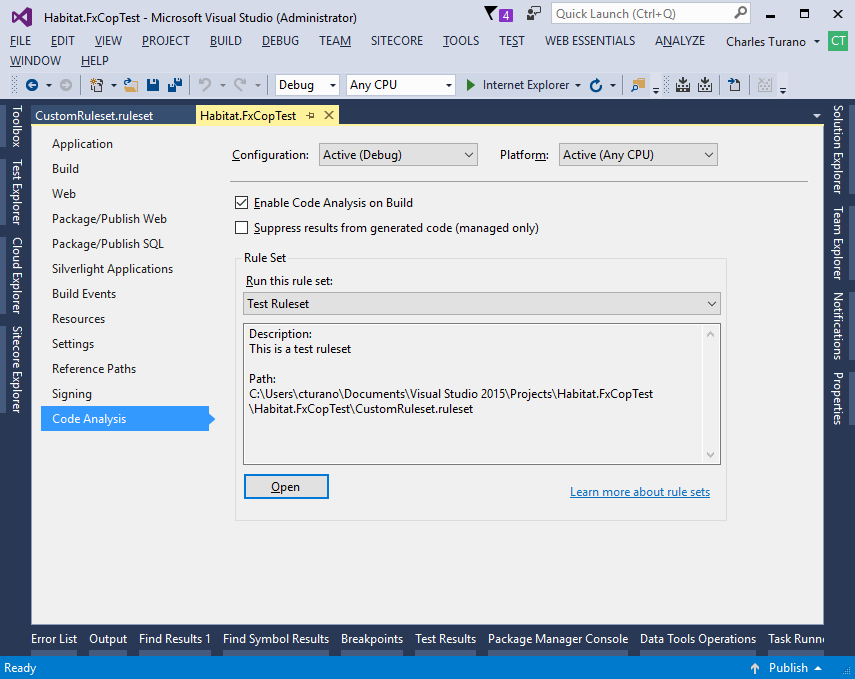 Next, create a custom rule set and view it in the rule set editor.

Select Group by: Category in the drop-down at the top left of the ruleset editor. You should see a category called “Helix”. Please open this and select the rules you are interested in. 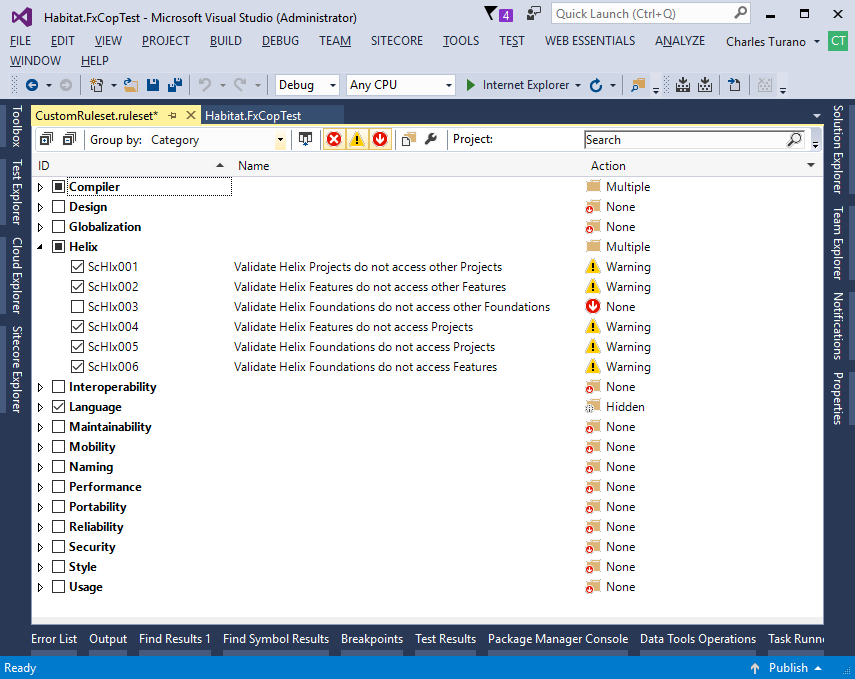 One of the main reasons these FxCop rules were created was to allow us to reduce the number of projects in the Habitat implementation while sticking closely to the Helix architecture. We feel these FxCop rules enables developers to easily ensure their projects are following the “High Cohesion and Low Coupling” design pattern of Helix.